Women of Simcoe Say No – Deputation to Orillia City Council

As part of The Women of Simcoe Say No (led by Emily McIntosh), many of us are applying to give deputations to City and Town Councils across Simcoe County, asking them to pass a motion to endorse Bill 5, the Stopping Harassment and Abuse By Local Leaders Act, and to write a letter of support to the province, urging them to get this important legislation passed quickly.

This was my second deputation for Women of Simcoe Say No – now expanding to Women of Ontario Say No – and was based on my deputation to New Tecumseth.  Because I had a larger time allowance with this deputation, I was able to expand a bit upon the original (and also not have to talk so quickly!)

The first video is the deputation and questions (which includes a very moving speech by Councillor Pat Hehn), and the second is the motion, discussion and vote. The full text and presentation, as well as the motion from Orillia are included below the video. 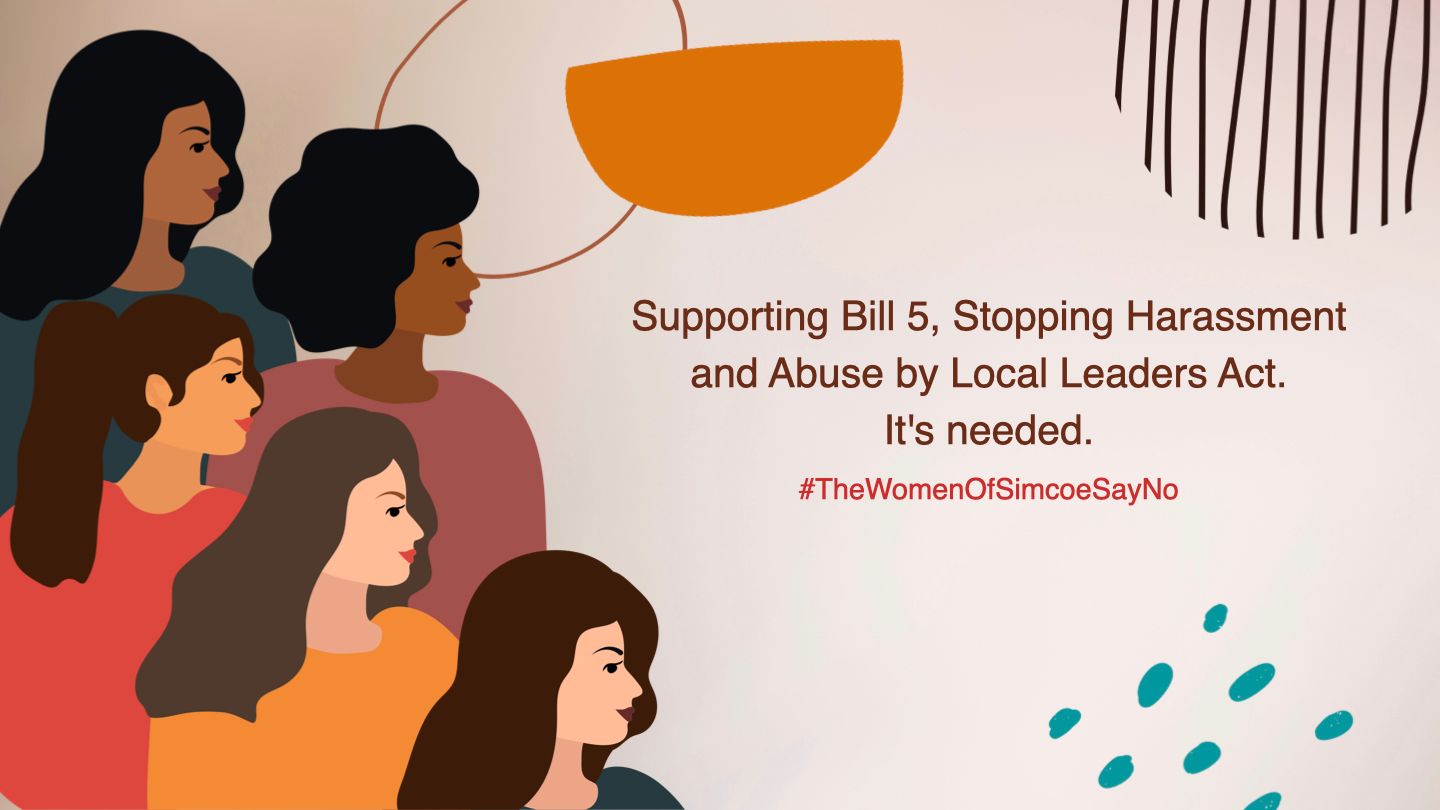 Good evening, Mayor Clarke and Councillors, and thank you for this opportunity to speak with you.

My name is Alyssa Wright, and I am here representing “The Women of Simcoe Say No”, a grassroots group formed in recent weeks to advocate that municipal workers be protected from abuse and harassment — just as workers in any other environment are already protected.

We are asking the municipalities of Simcoe County to support Bill 5, the Stopping Harassment and Abuse by Local Leaders Act. And we are asking that this endorsement be communicated to the Province before they return to the Legislature on October 25 — encouraging them to make second and third readings of this bill an urgent priority, for the sake of all municipal staff and those working with municipal governments.

I lived in Orillia from 2006-2014, when I moved to Barrie (I loved Orillia, don’t hold it against me, I was just spending way too much time on the highway!). Embarrassingly enough, my new city was named by MPP Stephen Blais as one of the four recent cases of abuse by Councillors that motivated his Private Members Bill.

So I’m motivated too. As are many others — this is not a partisan Bill. In the previous sitting of the Provincial Legislature, this Bill — then Bill 10 — passed second reading unanimously, with full support of all parties. Unfortunately, Bill 10 died when the government called an election this spring, so MPP Blais re-introduced it as Bill 5 on August 10 — incidentally, the same date that the Strong Mayors, Building Homes Act had its first reading, which received Royal Assent within four weeks.

Bill 5 needs to also be passed that quickly. In its previous iteration, it’s already gone through an extensive consultation process (co-led by your own MPP, Jill Dunlop) to get to its current form. Municipalities need these basic tools to keep their staff and the public safe — tools that already exist in every other workplace in Ontario. 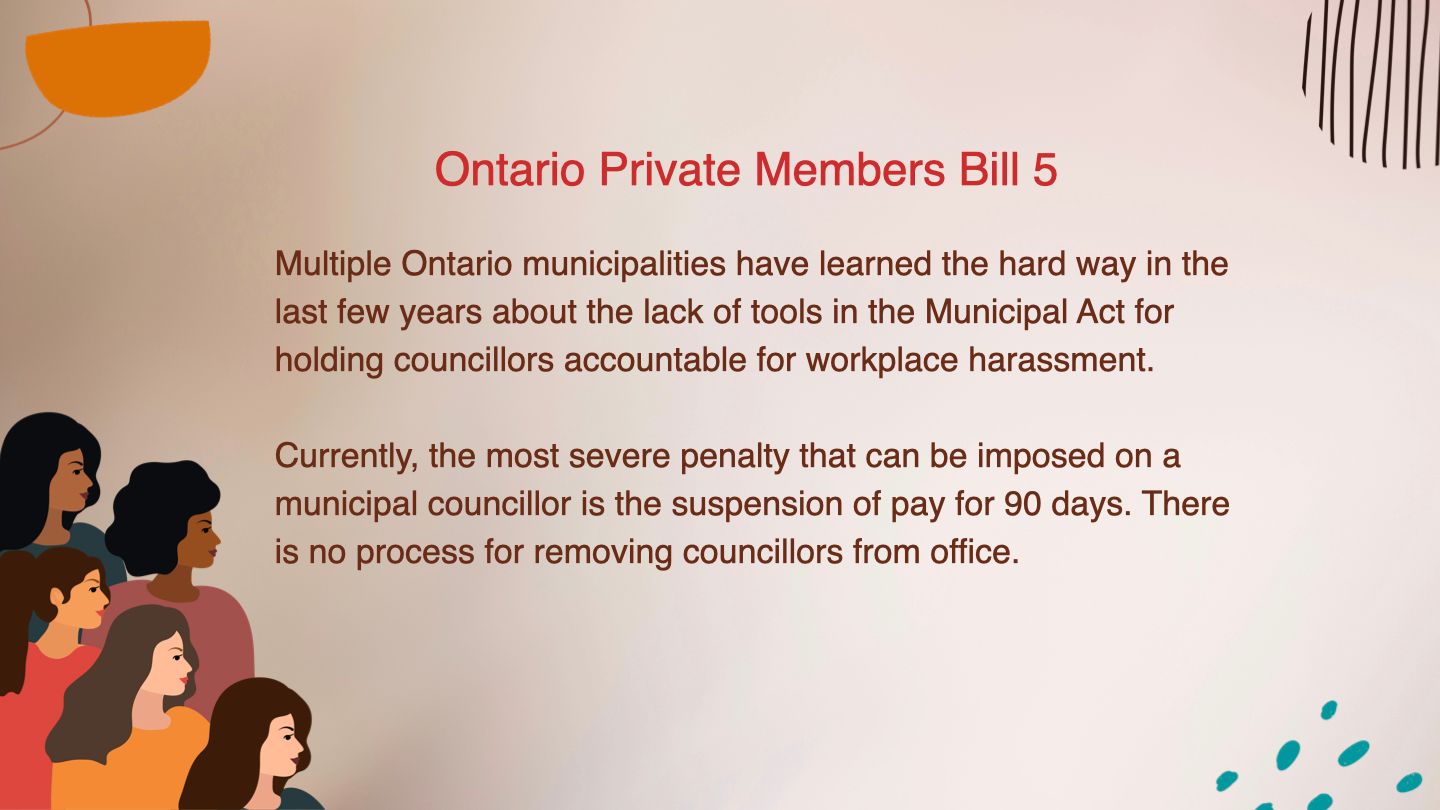 Residents and City Staff in Ottawa, Brampton, Barrie, and Mississauga have recently learned the hard way that the Occupational Health and Safety Act — and the tools it provides to protect people from workplace violence and harassment — do not apply if the perpetrator is an elected official.

In any other workplace, if someone was found to have been violent or abusive with another person, there would be measures available to ensure that no further harm would be caused to their victim or anyone else in the workplace — up to and including removing the perpetrator from their position.

If the perpetrator is an elected official, however, the strongest remedy currently available under the Municipal Act is that the Integrity Commissioner can suspend them for 90 days without pay — after that, they are free to return to the workplace. And their victim — or victims — must make the decision of whether they can afford to leave a workplace that cannot keep them safe, or if they must stay and face their abuser every day until the end of the Council term.

Which is about to be November, 2026, because — as I’m sure you know — we are about to have a municipal election. Which means that, unless Bill 5 is passed, our incoming elected officials know that they will have four years of carte blanche to behave as badly as they wish, just so long as they don’t get criminally convicted.

Fortunately, most mayors and councillors would likely not take advantage of such freedom. But the possibility is still there, and we need to shut that possibility down. 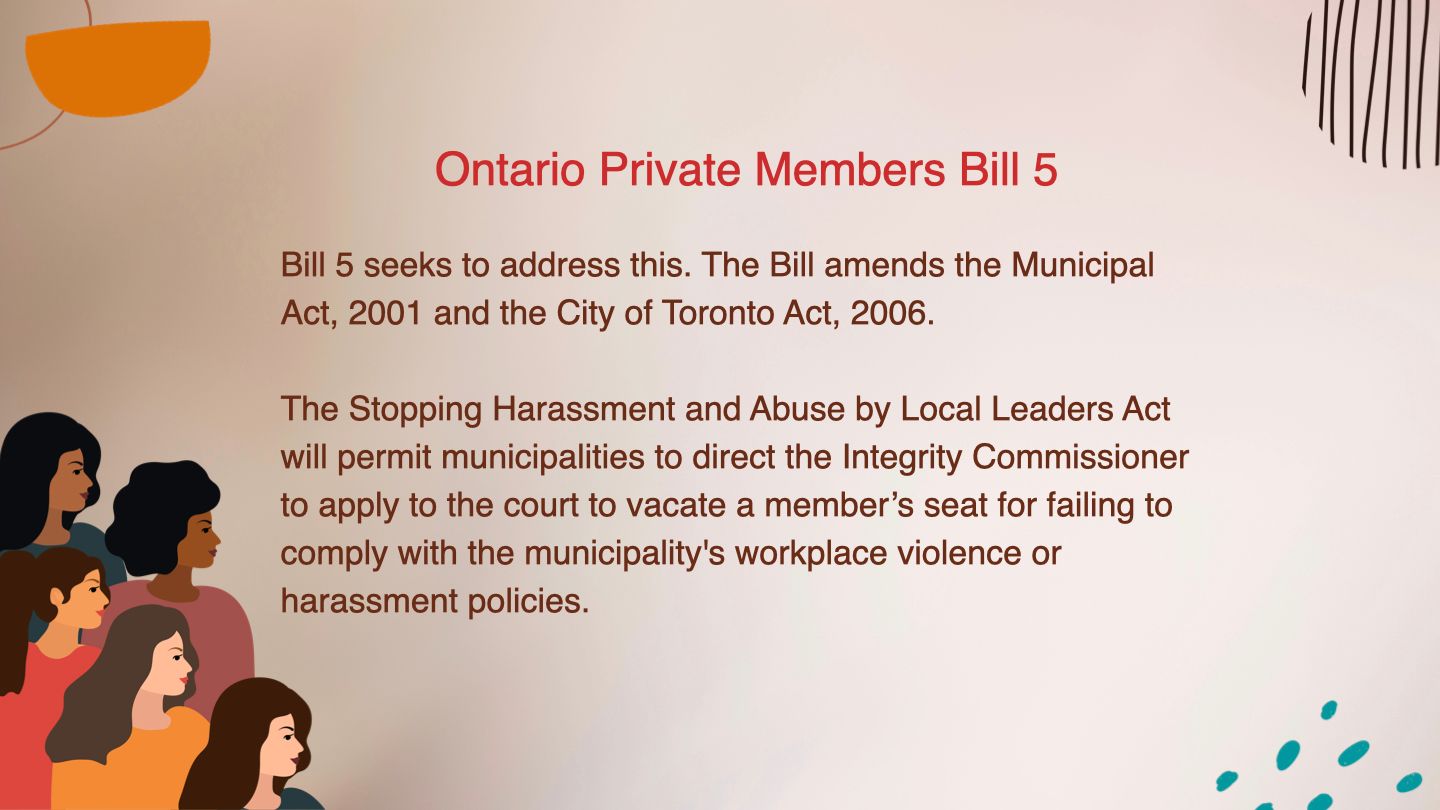 As soon as Bill 5 is passed, each municipality’s Code of Conduct would include a requirement for Councillors and members of Local Boards to comply with workplace violence and harassment policies.

It would also permit Municipalities and Local Boards to direct the Integrity Commissioner to apply to the court to vacate a member’s seat if it is determined that the member has contravened these violence and harassment policies.

Also, should a member be removed from office in this way, there would be restrictions on their running in subsequent elections, or being reappointed to the Council or Local Board — in much the same way as a candidate who fails to file a financial statement for their election campaign is currently prevented from running in a subsequent election.

Let that sink in — under current legislation, someone who doesn’t file a campaign financial report is prevented from running in the next election. But an incumbent who is found to have assaulted a staff member, a colleague, or a member of the public has no such restrictions, and is free to run again.

As it stands now, the respondents from the Brampton and Mississauga cases are running for Council again, and the respondent from the Barrie case is running for Mayor. Can you imagine what is going through the minds of Municipal Staff right now, as they contemplate the next four years without Bill 5? 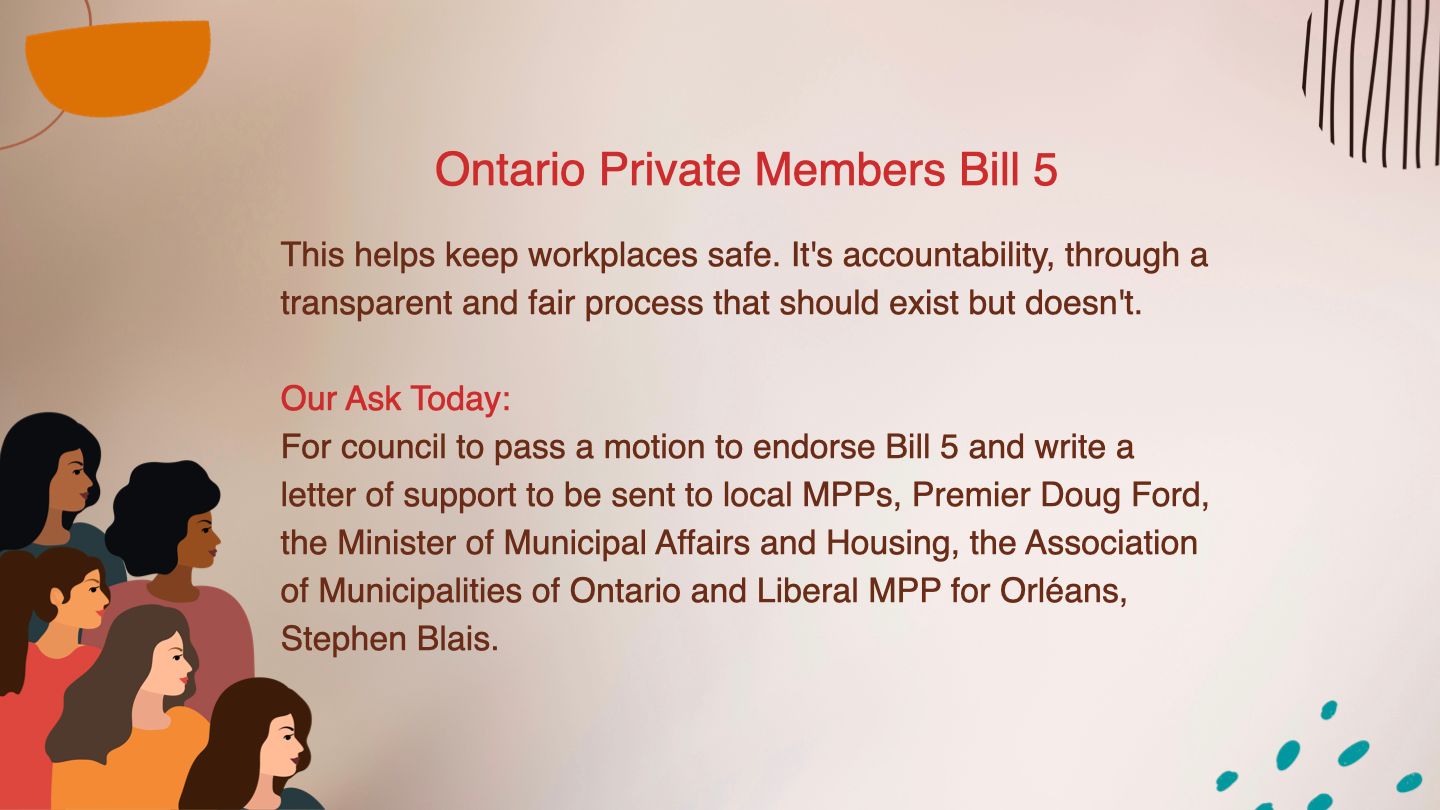 The Stopping Harassment and Abuse by Local Leaders Act will help keep municipal workplaces safe. This accountability, through a transparent and fair process, with multiple layers of decision-makers should already exist. But it doesn’t.

Our ask of you today is for absolutely zero dollars, zero partisanship, and very little of your time. All we are asking you is to show your care for your own staff, your colleagues, and the public, and that you are willing to make City Hall a safe place for all people, from all people.

We are asking Council to pass a motion to endorse Bill 5, and to write a letter of support circulated to:

I am happy to report that the municipalities of Barrie, Springwater, Wasaga Beach and New Tecumseth each passed such a motion this month, and our group has deputations scheduled in several other municipalities in the coming weeks. I am also excited to report that “Women of Simcoe Say No” is now having to change its name to “Women of Ontario Say No”, as municipalities further afield are reaching out and wanting to get on board.

Please join them, and help protect everyone working for and with municipal governments across Ontario.

When Stephen Blais first put his private members bill together, as Bill 260, it was motivated by the case in Ottawa. By the time it received first reading, both Brampton and Barrie were added to the list of reasons why we need this bill. Bill 260 disappeared because provincial government was prorogued for the federal election period, so the bill returned as Bill 10. Now that it’s Bill 5, its third iteration, Mississauga has been added to the list. How many more cities have to endure the same situation before this Bill finally gets passed?

Please, add your name to the list of municipalities that support this bill, before there is any more “motivation” for this bill. City staff, your colleagues, and the public deserve the same protections that exist in every other workplace across Ontario.

Please, endorse and support the Stopping Harassment and Abuse by Local Leaders Act.

Thank you so much for your time.