After declaring last year that I would treat my birthdays a la Merrill Markoe's "It's My F---ing Birthday" heroine (see here if you missed it and are bothered by said missing), it seems I totally blew it on the first chance I got... oy!

So... Part I is the birthday recap, Part II will be what have I learned this year and what do I hope to learn in the coming year.

The birthday week started out quite well, with Therapy Monday (yay therapy day!) being followed up with our FINALLY having a fully-functional kitchen for the first time in almost a full year.  (Yes, I said it with my outside voice, so you just know the gas stove is about to explode... send hunky firefighters!)

My BEST GIFT EVER wasn't even a birthday gift, as far as I know.  On Tuesday, our friendly neighbourhood postal worker (no, she really IS friendly) knocked on the front door with a large-ish package for me.  I will admit, I was more than a little apprehensive, after the last very-large package delivered to the door (see here if you don't get the reference), but... I didn't recognize the handwriting as anything familial, so started to breathe again.  And then I noticed the "Official Gate-Keeper Survival Kit" printed in red along the bottom of the envelope...  Mwahaahaaaaa!  Friend and fellow survivor DVS, in her forever-creative way, had sent me a care package.  Inside was a card with a chocolate bar taped to it and the instructions "Step One: EAT CHOCOLATE" on the envelope.  I pulled out the remaining package contents and read the card, which explained it all:
Gate Keeper Survival Kit
Just add Alcohol
(preferably in a sippy cup so pudding doesn't get in it)
(If you don't understand the pudding references, visit the bottom of this post.)
This was totally unexpected, and had me hooting and laughing for hours.  Then Don came home, and I hooted and laughed some more.  I seriously needed some hooting and laughing this month...
Later that day, once of my cello students also gave me an awesome birthday gift, without realizing it.  She bashfully came into her lesson, admitting she hadn't really practised in the past week, because she was too busy trying to figure out how to play two of her favourite songs.  I asked if she'd had any luck, and she produced HER OWN HAND-WRITTEN MANUSCRIPT of the two songs.  I asked her how she'd figured it out, and she said she'd listened to the songs a few times and tested things out on her cello to make sure she'd written them down correctly.  I withstood the urge to burst into happy tears and hug her on the spot, but did tell her what an amazing thing she had just been able to accomplish, especially when she's only been playing cello for two years.  And then I did my best to not grin and blubber like a crazy fiend throughout the rest of her lesson, as she played her arrangements and tried to figure out how to make them better.  ONE PROUD MAMA, let me tell you.  :-)
Wednesday was another musical gift, although one that did remind me of how much I've been missing since leaving the musical metropolis.  I'd been asked to sub in on a chamber music concert, and had half-heartedly said yes, because I didn't really know anything about the organizers and, sorry to say, this is an area where volunteer community orchestra members are considered "pros", so my expectations are not terribly high.  Well, those expectations were blown out of the water, as I found myself playing with people who ACTUALLY WERE pros.  First music high I've had since playing with Victor freakin' Wooten in Feb.'11 (see here for that reference) -- and that was just the rehearsal (the concert was Friday).  Granted, the majority of the players had been imported from further south, but it was so refreshing and revitalizing to be able to play a concert with only one rehearsal together and have it not suck, to work with players who spent the rehearsal discussing phrasing and dynamics, instead of just trying to get the right notes, who actually gave a crap about the music.  I was finally excited about my chosen profession again.  Halle-freaking-lujah!
Perhaps it was this newly-reawakened longing to live closer to potential musical collaborators, perhaps it was the cumulative effects of this past month, perhaps a bit of both, but on Thursday -- the actual birthday day -- I was fighting one nasty bitch of a depression.  To the extent that I caught myself staring at the paper-slicer / guillotine in my office and fantasizing about what might happen if I used it to slice my fingers down to the first knuckle.  Fortunately, the majority of me thought that this was a bad idea, but the bit of me that came up with the idea did take quite a bit of talking down.  Which freaked me out a little (!), because I haven't had any self-harm ideas since my high school years -- in which I would flatten myself against the back wall of the subway platform (and preferably at the front of the train), just in case a part of me decided to jump, as I hoped that would give the other parts of me time to talk that bit out of it before the train came.  I imagine this finger-slicing bit of me was at least closely related to that bit.  I suppose this self-destructive fragment could have been triggered by this month's goings-on, although it seems rather strange that she would re-appear just when I'm more determined than ever to stay alive, be fully functional, and shout my story to the rooftops.  Maybe she's still terrified of that concept.  Or maybe, as with all the other dissociated bits that have taken their own sweet time to make an appearance, she now knows it's safe to show herself, to become integrated with all the other shards, where she'll be loved and protected, at last.  I will go with the latter for now, barring any future finger-mutilation urges.
Suffice it to say, my fingers are still fully intact.  Hence the typing.  :-)
And I managed to get my public face back on again in time for my sweetie to take me around the corner to Era 67 for dinner.  There, we were greeted by my birthday twin, Cory, who made sure we were treated right.  :-)  That's me and my birthday twin below (he's the one with the Movember 'stache, in case you were wondering). 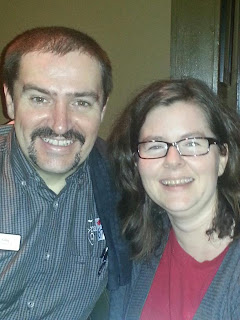 Regular readers of our Brights blog are probably clamouring for the food and beverage report.  I'd hate to disappoint!  We'd brought a bottle of our favourite Amarone, but wanted to give it a chance to breathe (nice excuse, huh?), so Cory decanted the wine while I had a Cosmopolitan and Don a rye & water (Cosmo is so much prettier!).  We usually split an appetizer, but Cory said the shrimp appetizer only had 4 shrimp, so we figured we'd each have an order.  He failed to mention that they were MUTANT shrimp, however.  Yes, that piece of battered yumminess that resembles a turkey leg below is actually a shrimp!  Note to self: go back to sharing an appetizer. 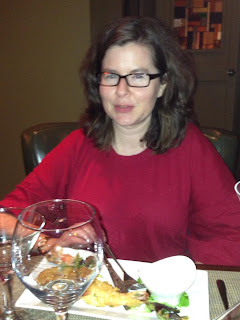 A (slightly inebriated) woman at the table next to us and her husband were enjoying an anniversary dinner together, and we got chatting away -- they made fun of Don for taking pictures of food, but they obviously don't understand that sometimes the most interesting things we have to say are food-related.  ;-)  (Seriously, I've actually had readers of our Brights blog COMPLAIN when I forget to include the food and beverage report in our tour reports...)
My main course was maple cranberry salmon over a bed of wild rice.  Maple cranberry salmon is almost as good as wine.  Almost.  Sadly, I was so full from those Pterodactyl legs shrimp that I could only make it partway through.  Don also had to take home a doggie bag (very rare occurrence!) for his breaded pork chop on a bed of garlicky mashed potatoes. 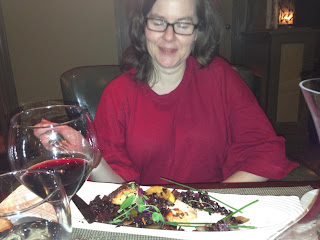 Just when we thought we could eat no more, Cory presented us with a special birthday treat: a warm butter tart on creme anglaise, garnished with fresh fruit -- we ordered some Dalwhinnie to wash it all down. 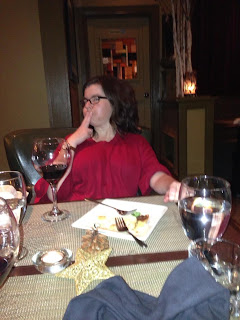