Well, I'm pretty sure nobody's watching, or the neighbours might have called the paramedics by now...

I have spent the day rehearsing the dance steps for Thursday's "One Billion Rising" flashmob at Barrie's Five Points (between 5:00 & 5:30 -- please join us if you can!).  This is what the dance is supposed to look like:

Break the Chain
I'm afraid that when my husband caught me rehearsing last week, he thought I was having a seizure or something, and ran up the stairs to rescue me.  I am hoping someone warns the paramedics that I'm not dying, just dancing -- and sends them to help those people dying of laughter.

What I lack in talent, I shall make up for in enthusiasm!

At girls' night on Saturday, I recruited my friend Lisa to join me in dancing -- fortunately, she was already quite drunk by that point in the evening!  ;-)  Our friend Betty, who actually DOES know how to dance, tried to give us a lesson, and was very helpful, though you probably won't be able to tell (trust me, you should have seen the "before" pictures!).

Participants were invited to share a video of "Why I'm Rising".  I took a big breath and contributed the following:

Why Alyssa Wright is Rising
My "moves" have improved, slightly, from that brief demonstration.  Hopefully I'll be able to get some photos and/or videos at the event that make it look like I've actually spent the day practising.

Because I don't dance.  Let alone in public.  I believe the last time I did so was as a nine-year-old, playing a Russian Rose in a ballet recital.  My one and only ballet recital.  There's a reason for that.

And I realized... not only do I not dance, I don't really walk.  At least, not in a fluid, happy-with-my-body kind of way.  I tend to walk so nobody will notice me.  I tend to walk as if my entire lower body was involved in a Kegel hold.  You know, if those muscles stretched all the way through my gluteus maximus and into my lower back.

Swaying hips?  Nope, not me.  Ass is firmly clenched, so as to eliminate any chance of a sway as my legs do the least they have to do to get me from here to there.  Dancing, should it happen, is in tiny little arm movements (as witnessed above), feet barely leaving the floor, knees maybe bending a tiny bit... maybe.

But as I got more comfortable with remembering the steps (other than the bridge, which I totally fail at every time!), and watched the dance students in the instructional video, and absorb the rhythms... my hips... started... SWAYING!  They swayed to the left, they swayed to the right, they did some weird gyrating thing I didn't think they were capable of... My hips were dancing!  Not only that, but my feet left the floor.  My arms wound around, my spine undulated... MY WHOLE BODY WAS DANCING!!!

For the first time in my 40-something years, I was actually comfortable in my body.  Comfortable letting it do its thing without worrying about whether someone would think I was an idiot or, more scarily for me, that I was trying to show off or be seductive or something (why I ever thought MY dancing might be seen as seductive, I'll never know... I may be dancing now, but let's be realistic!).

Letting my body express the music instead of hiding behind my cello.  Which, let's face it, covers a substantial part of my torso, hiding any swaying potential.

But today, I am dancing like nobody is watching.

I have no idea if I'll be able to recreate this phenomenon when someone actually IS watching, but... I'll give it my best shot.  Because:

This is my body, my body's holy
No more excuses, no more abuses
We are mothers, we are teachers
We are beautiful, beautiful creatures

I have no idea if I'll be able to get through the dance without laughing, and I KNOW I won't be able to hear that last line without bawling -- it has happened EVERY TIME today, and the song has been on CONSTANT rotation since 9am (you'd think I'd be used to it by now?!?).

My word for the year was "Daring".  I think I should get bonus points for February.  :)

Even without the points, though, I know I'm helping.  Not through my fabulous dance moves (!), but through standing in solidarity and protest.  And in the hope and faith that we can change the world -- one tiny heart (or vagina) at a time.

Until tomorrow, my friends -- Dance, Rise. 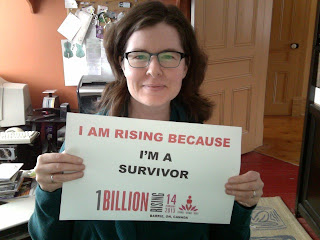